From an interview with a local journalist on the celebration of the Macedonian Orthodox Christmas, conducted in December 2018 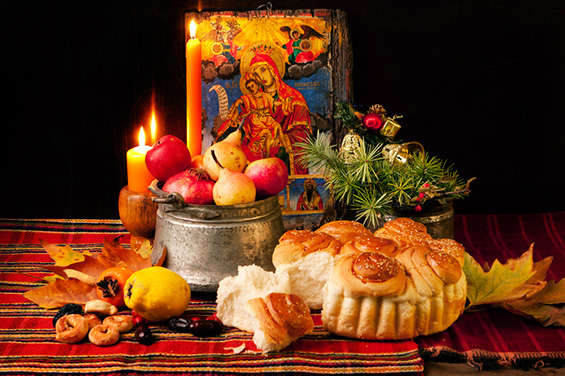 Q: Does the Macedonian Church do anything special to observe Advent?

Maybe more than you will know, the calendar of the Orthodox Church is full with feasts which commemorate special events of the biblical and church history. Among them, of course, the Feast of the Nativity of Christ (Christmas) has a special place.

The main spiritual preparation of the Orthodox for the Feast of Nativity is the observation of the Nativity Fast or Advent as it is called in the West. The fast lasts 40 days before Christmas Day. During that period the faithful Orthodox Christians abstain from meat, eggs and dairy products. The general fasting rule in the Orthodox Church, as you can see, is much more stricter than in the western Christian tradition. In addition to this fasting season, the Orthodox Christians fast every Wednesday and Friday, and on three other fasting seasons, before Pascha (Easter), before the Feast of the Apostles Peter and Paul and before the Feast of the Dormition of the Mother of God. If you combine all the fasting days, a typical Orthodox who follows the whole fasting rule of the Church, two thirds of a year is a vegan. Of course, the culinary side of the fast is just a secondary thing, and a more important thing during the Nativity fast, as a preparation for Christmas, is to increase the prayer, to deepen one’s spiritual life with more regular attendance of the church services and receiving Holy Communion, and to increase the practice of the charitable work. We fast, and that means we should save some money and help the needy, emulating the example od Saint Nicholas whom we commemorate during this season. During this season, we are trying to remember that the Birth of Christ is not just an event that we commemorate, but that it should be an event in which we participate, allowing Christ to be born in our hearts.

Fr. Georgij: For all the Orthodox Christians in the world, the heart of the religious celebration of Christmas is going to church services and receiving Holy Communion. There are also many local folk traditions related to Christmas celebration that developed during time and vary from place to place. For instance, Macedonian Orthodox begin their celebration with the Christmas Eve Day. Our Christmas is celebrated on January 7th. On January 5th, a day called Kolede (from the word kalanda, meaning caroling) the little children go from door to door and sing special songs that announce the birth of Jesus Christ. People listen to them and give them treats: special Christmas Eve cookies, candies, different fruits and nuts. There is also a tradition among some Macedonians to gather outdoor around a fire. Some say it represents the shepherds who received the news about the birth of the Savior by angels. To be honest, this custom was accepted probably under the influence of the Serbian custom and the official Macedonian Church is making efforts to reject it as a custom with pagan roots which very often is conducted in a non-Christian way.

On January 6th, the Christmas Eve Day called Badnik (meaning Vigile), the Macedonians gather with their families at home and have a special meal filled with a lot of symbolism. The supper is Lenten because the fast is not yet over and usually it includes baked bread with a coin inside it, pastries, beans, fruits and nuts. The family say a prayer and then the head of the family breaks the bread and distributes a piece to everyone in the household. The one who will receive the piece with the coin is believed will be blessed in the year to come. The coin is then put in a cup of wine and all drink from the cup. The symbolism given to this custom is explained in the following way: the bread represents the womb of the Virgin, and the coin is Christ who sheds His blood for our salvation. There are also many other traditions and rituals that vary in different locations.

On Christmas morning, people go to church for the Christmas Divine Liturgy. Following the service they greet each other, saying Hristos se rodi (Christ is born) and responding Navistina se rodi (Truly He is born). The people visit and greet their parents or grandparents, also their godparents, relatives and friends. The fast is over and now meat is put on the table. There are many different Macedonian specialties that are prepared on Christmas Day and usually include pork.

Q: What is the Macedonian focus on Christmas (religion, spirituality, faith, Christ, etc.)?

Fr. Georgij: Unlike here in the west, where Christmas is commercialized on a high level and where the focus is usually on something else than Jesus Christ, among the Macedonians Christmas is always first of all a religious holiday, a celebration of the birth of Christ. Secondary, it’s a special holiday that is focused on the family, and Macedonians are indeed a family-oriented nation. The Orthodox Macedonians who live in America and follow the old Julian calendar have the opportunity to keep that focus. Why? They also can and are involved in the commercial Christmas system here, and when December 25th comes, they share the gifts like everyone else, without even mentioning the birth of Jesus. But, when all the noise of Christmas and New Year celebration ends, they can peacefully celebrate the Nativity of Jesus Christ on January 7th, greeting each other with the special Macedonian Christmas greeting that reveals the essence and the real joy of Christmas: Christ is born! Truly He is born!